Hessert, in the sixth qualifying group, was the last car off pit road among his six-car pack. His strategy was to lay way back in order to get a run. It worked.

“Being in the back of group was obviously advantageous, so we could sit way back and get a run,” said Hessert. Hessert was so far back he seemed in danger of losing the draft altogether.

“I was worried about that….we were at least a couple hundred yards back. I was worried we weren’t going to get there, but the car did what it was supposed to do and we got it done.

“This is obviously a great start to the weekend for us. I want to thank Venturini Motorsports and all my guys on the crew…our sponsors Andrews, Renton Coil Spring, Musselman’s Apple Sauce.”

Hessert circled the 2.5-mile track in 48.143 seconds, an average speed of 186.943 mph. Friday’s pole award was Hessert’s fifth of his career and third since joining Venturini Motorsports in 2016. 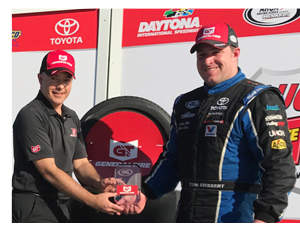 Set to make his 180th career ARCA start, Hessert has notched 6 career victories to go along with 53 top-five and 106 top-ten finishes throughout his career. Already a restrictor-plate winner at Talladega in 2013, the 30-year old driver hopes to complete the sweep and park his Andrews Toyota in Daytona’s famous Victory Lane this afternoon.

Today’s Lucas Oil Complete Engine Treatment 200 Driven by General Tire is live on FS1, with live coverage beginning at 4 p.m. Eastern. In addition, arcaracing.com will feature live timing and scoring and live chat. Local radio affiliate WNDB will also provide live audio coverage of the race, which will be streamed live over arcaracing.com.