On Friday, August 8th, the green flag for the Bully Hill 125 will wave at 6:15 p.m. ET and the race will be broadcasted on Fox Sports 1 on a delayed basis, on Sunday, August 17 at 9 a.m. ET. Follow the track @wgi on twitter for live updates, hashtag #BullyHill125

Ranger is pulling double-duty as he will also be the favorite for the Canadian Tire Series race Sunday with the JuliaWine.com Le 50 Tours. The race will again be part of the prestigious Grand Prix de Trois-Rivieres, an annual racing festival through the streets of Trois-Rivieres that celebrates its 45th running in 2014. Ranger has won four times at Trois-Rivieres. DJ Kennington is the defending race champion, while Trois-Rivieres’ own L.P. Dumoulin leads the championship standings entering his hometown race. Formula Drift multi-time champion Vaughn Gittin Jr. will make his NASCAR début at Trois-Rivieres.

The JuliaWine.com Le 50 Tours is Sunday, August 10th at 3:30 pm ET at the Circuit de Trois-Rivieres in Quebec. For live updates from the track follow on twitter @GP34, hashtag #JuliaWine50

Friday at Stafford Motor Speedway will also mark the start of the second half of the NASCAR Whelen Modified Tour season. Championship leader Doug Coby has won the Call Before You Dig 811 150 in the two previous seasons, and was victorious in the tour’s last visit to the historic half-mile in early June. Coby and Bobby Santos, who won the first 2014 Stafford race, have taken the checkered flag in 11 of the last 17 events at Stafford. 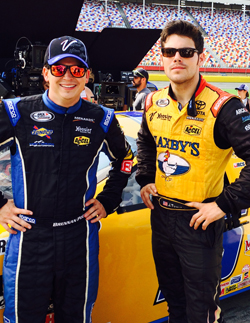 ve-time ARCA winner, Brennan Pool will sub for his Venturini Motorsports teammate, John Wes Townley in Saturday’s ARCA Racing Series at Berlin Raceway in Michigan. Poole, who claimed a fourth-place finish in the ARCA event at Pocono Raceway last weekend, will pilot the No. 15 Zaxby’s entry.

Last week at Pocono, during ARCA qualifying, Townley had a wreck. Townley is now in good health, but sat out of both the ARCA and NASCAR Truck events at Pocono as a precautionary measure.

“As a precatuion, John Wes Townley will sit out Saturday night’s ARCA even at Berlin Raceway,” said a team spokesperson. “Townley did not compete in last week’s ARCA race at Pocono Raceway following an incident during qualifying earlier in the day.”

During his 2014 ARCA début last week at Pocono, Poole qualified the No. 66 The Identical Movie Toyota on the outside pole, led 31 of 50 laps, and finished in fourth-place. The 23-year-old driver has been instrumental in VMS’s success serving as consultant, driver coach and spotter for many of the team’s current and former drivers. Poole, the 2012 Hoosier Superspeedway Champion, also finished a career-best of third in the 2012 ARCA driver championship point standings, in his only full season in the series.

Earlier this season during ARCA’s first visit to Pocono in June, Poole practiced and qualified the No. 15 Zaxby’s Toyota while Townley was fulfilling his duties in the NASCAR Camping World Truck Series. After posting top-10 practice speeds, The Woodlands, Texas native claimed a second-place qualifying effort, before handing over the race driving duties to Townley.

“You never like to see any driver, especially your teammate, get shaken up after an accident,” said Poole. “I’m really glad John Wes is okay and this week will just give him additional time to rest before returning to the driver’s seat. I just want to thank Zaxby’s for giving me the opportunity to fill the role this weekend.”

Venturini Motorsports and the ARCA Racing Series will head to Berlin Raceway in Marne, Michigan for the Federated Auto Parts 200 on Saturday, August 9. The green flag will wave shortly after 8:15 p.m. ET with ARCAracing.com carrying live timing and scoring throughout the day’s on-track activities.

Come on...we know you have something to say..... Cancel reply

This site uses Akismet to reduce spam. Learn how your comment data is processed.