2014 ARCA Racing Series presented by Menards championship team Mason Mitchell Motorsports (MMM) will cease operations effective immediately. The team captured the drivers and owners championship with the series in their first season of competition during the 2014 season. The team made 123 starts in the series with 32 different drivers during their five-year span racing with the circuit. END_OF_DOCUMENT_TOKEN_TO_BE_REPLACED

Chase Elliott, driver of the #24 SunEnergy1 Chevrolet, talks with a crew member in the garage area during practice for the NASCAR Sprint Cup Series Hollywood Casino 400 at Kansas Speedway on October 14, 2016 in Kansas City, Kansas. Photo – Chris Trotman/Getty Images

In the first race of the Round of 12 last weekend at Charlotte Motor Speedway, Chase Elliott led 103 laps before a wreck on lap 258 ended his day and put the rookie driver three points behind the final transfer spot to the Round of 8 heading to Kansas Speedway.

Elliott qualified 13th for Sunday’s Hollywood Casino 400 and was one of just three Chase drivers that started outside the top-12. Elliott cracked the top-three at lap 121 and passed Kevin Harvick for the lead on lap 169 of the 267-lap race before a left-rear tire issue resulted in an unscheduled pit stop. Elliott would lose a lap and return to the track one lap down in the 24th position.

The Dawsonville, Georgia native would get back on the lead lap under the seventh caution of the race at lap 222 but a second tire issue with 23 laps remaining forced the team to come to pit road for the second unscheduled stop of the afternoon. END_OF_DOCUMENT_TOKEN_TO_BE_REPLACED

Mason Mitchell is our guest on Fan4Racing NASCAR Weekend Preview on Tuesday, July 5 at 9:30 pm ET. Call 929-477-1790 or tweet @Fan4RacingSite or @beberly18 with any questions or comments during our LIVE broadcast.

The ARCA Racing Series presented by Menards heads to Iowa Speedway this weekend and Mason Mitchell will be behind the wheel for the first time in 2016.

Last season at Iowa, Mitchell won in thrilling fashion, passing Kyle Weatherman in a one-lap overtime sprint to the finish at the 7/8-mile track located a mere 40 miles from Mitchell’s hometown in West Des Moines. END_OF_DOCUMENT_TOKEN_TO_BE_REPLACED 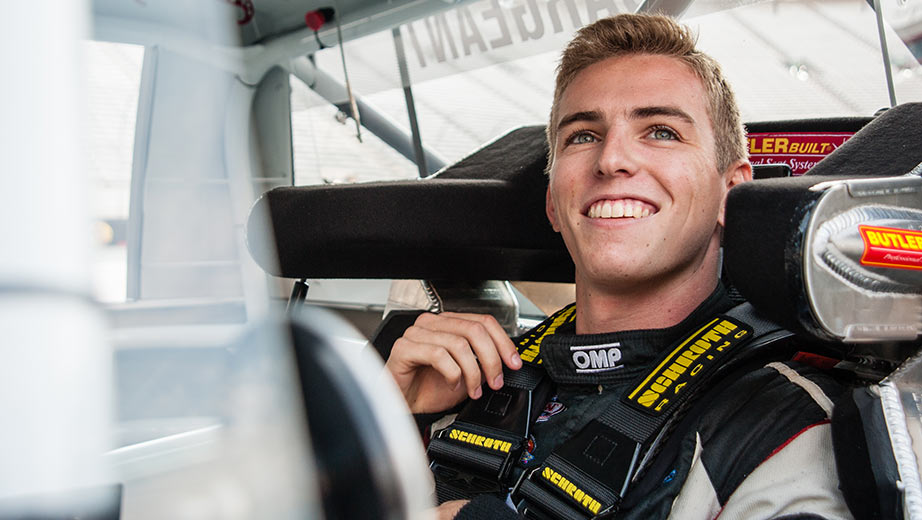 Dalton Sargeant is our guest on Fan4Racing NASCAR Weekend Preview on Thursday, June 23 at 9:30 pm ET. Call 929-477-1790 or tweet @Fan4RacingSite or @beberly18 with any questions or comments during our LIVE broadcast.

Dalton Sargeant is ready to compete this weekend at Winchester Speedway in the ARCA Racing Series presented by Menards Herr’s Potato Chip 200. Sunday’s race will mark the seventh start of the season for Sargeant, who is slated to compete in 15 of the 20 races on the 2016 schedule with Venturini Motorsports.

Sargeant is coming off the worst finish of his rookie campaign, which was still a ninth-place result, two weeks ago at Michigan International Speedway.

The 18-year-old Boca Raton, Fla. native is paired with veteran crew chief Billy Venturini this season and the duo has experienced success from the start. Venturini is no stranger to the ARCA Racing Series as a driver, having recorded one win, 28 top-five and 75 top-ten finishes in 162 starts between 1994 and 2007. END_OF_DOCUMENT_TOKEN_TO_BE_REPLACED

Jimmy Small is our guest on Fan4Racing NASCAR Weekend Preview on Thursday, June 16 at 9:30 pm ET. Call 929-477-1790 or tweet @Fan4RacingSite or @beberly18 with any questions or comments during our LIVE broadcast.

Small will help preview the weekend of racing action at ‘The Fastest Short Track on the Planet’ as well as discuss the abundance of fan amenities available at the track in Newton, Iowa.

Coming to NASCAR in 2008, Jimmy Small was working out of NASCAR’s Daytona Beach, Fla., headquarters coordinating event weekends with tracks, television partners and teams. Small worked with NASCAR in various business-building capacities, including serving as senior manager for team marketing services within the NASCAR Industry Services department out of the Charlotte, N.C., office. In that role, he was the business and marketing liaison with teams and drivers in all three national series. END_OF_DOCUMENT_TOKEN_TO_BE_REPLACED